What is a pacemaker?

A pacemaker is a small electric device which generates electrical impulses to regulate your heart rhythm. It is generally fitted in the chest but can sometimes be fitted in the abdomen. About 25,000 people are fitted with a pacemaker each year in the UK. 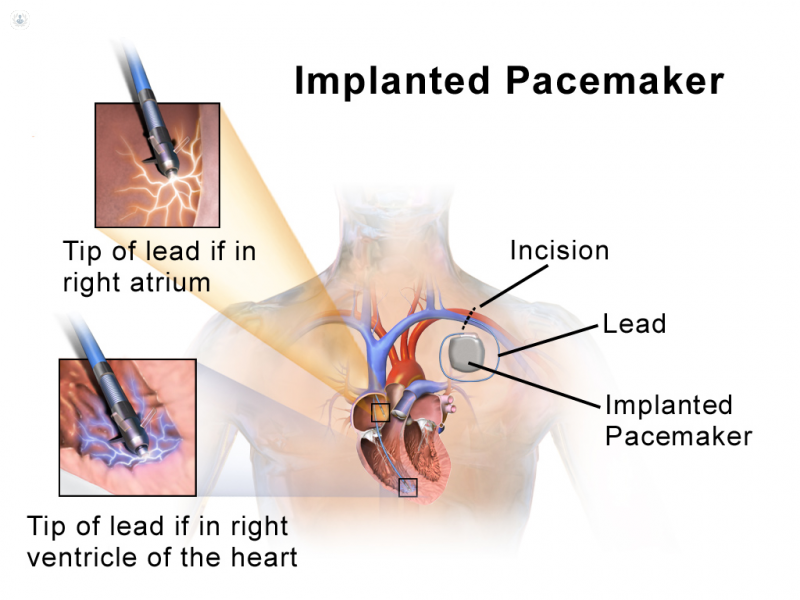 Most people will be fitted with a traditional pacemaker, of which there are three types, depending on how many wires it has:

Some people might be fitted with a special type of pacemaker designed to coordinate the pumping action of the different chambers of the heart. In some cases, a defibrillator is attached. The use of this type of pacemaker is known as cardiac resynchronisation therapy, and it is recommended in people who have heard failure because of their left ventricle.

A pacemaker is a popular device used to treat a variety of heart problems. You might need a pacemaker if:

If you’ve had a heart attack in the past and your doctor thinks you have a high risk of having another in the future, they might recommend a similar device to a pacemaker called an implantable cardioverter defibrillator (ICD).

What does fitting a pacemaker involve?

Pacemaker surgery is a safe operation generally performed under local anaesthetic, taking about 45 minutes to perform. You can usually go home a few hours after the surgery is complete. The battery in the pacemaker can last for about 10 years, so you’re unlikely to have to get it replaced any time soon.

After your pacemaker has been fitted, you’ll be advised on how to use it, and in particular, what to do to avoid electrical or magnetic devices interfering with the electric signals your pace produces. It’s important to let your car insurance company know that you have a pacemaker, as well as the DVLA.

Any cookies that may not be particularly necessary for the website to function and is used specifically to collect user personal data via analytics, ads, other embedded contents are termed as non-necessary cookies. It is mandatory to procure user consent prior to running these cookies on your website.